We received the Bonus Book Thursday night around midnight.  Here are all the Bonus Locations:

Here are the Bonuses I selected to go after: 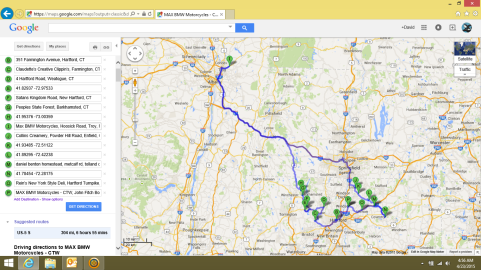 This is a total of 7 hours riding time, giving me just 60 minutes for traffic, making each stop to record the answer to the Bonus Question, and lunch at the northern point.

There was an informal rider’s meeting Friday evening in the hotel.  The biggest difference in this 3rd annual Nutmeg is that the lunch stop is no longer a mandatory bonus, is no longer a required one hour rest stop, and as a result of that the rally end time is now 4:30 with a penalty window finishing at 5. The first two years we ended at 6 and the penalty window finished at 6:15. That left us standing around the scorer’s table eating hamburgers and hot dogs until about 9 p.m. This way the entire thing will be done right around sunset, and many of the people within an hour of Hartford will ride home.

I had put together 14 different bonus locations, with a 15th in reserve in case I had the time. That last reserve one was the closest to the finish and was also a bit odd in exactly the placement of the bonus. I didn’t want to start off the morning driving around a giant parking lot looking for the bonus, so I figured leave it for the end. I had spaced them out pretty evenly in a loop going north west in the morning with the final 90 minutes of the morning riding up to Troy New York for the MAX BMW sponsored lunch and the giant 250 bonus point grab. However, at the morning meeting, the rallymaster announced that since it was no longer  a mandatory stop, the point value would only be 125.  That still is the biggest bonus in the rally, so it was worth jumping off 3+ hours r/t to go and get it.  Was there some other way I could spend 3 hours and get 125 points?  Not likely.

The gusts of wind that slapped me around riding up here on Friday afternoon had disappeared during the night, taking with them the 100℅ cloud cover. Even though it was 38°F rally morning, it felt like the 50s compared to the prior day’s wind assaults.

The 15 or so riders in our motel had a quick lobby bite then took the 5 mile ride to MAX BMW’s East Windsor branch for the odo check and rider’s meeting.

While the Rallymaster had alluded to a change in the lunch stop points value, he really threw us a curve ball as he announced that the entire Troy, NY location was off the rally.  Most of us would have had that as our mid-day stop as it fell naturally upon the map.  Look at the bonus map on top and you see a group west of Hartford and another east of Hartford.  Many of us had planned one side in the morning and one after lunch wth the 3 hour r/t to Troy in between. Now the lunch bonus is 30 minutes at the start/finish location and you can do the 30 minutes any times during the rally, 8-4.  We had about 15 minutes to look things over and figure out how to use the extra 2+ hours before the 8am start.

About 20 riders lined up to get the 8 am break done and the rest were released.  I had planned on simply adding 2-3 more bonii to each my morning and afternoon loops and sticking with the mid-ride lunch break.  I set off for what should have been an easy one because I did it last year as well; How many chimneys on the Mark Twain House for 9 points.  I proceeded through the morning collecting dates from plaques (1720), number of sundae toppings from an ice creamery (11), and about 10 other factoids until I rolled into the lunch break at 12:17.

I had only done about 8 highway miles so far, the bulk being back roads through Connecticut farm country, including Action Wildlife.  I also went off-roading again, only a total of 10 miles in the morning then another few in the afternoon but that is slow going in 1st and 2nd gear.

my moving avg speed of 38mph

traffic at the scoring table

Kathryn & her husband (Triumph America) have been in all 3 Nutmegs with me.

After my 30 minute lunch break, I went off on my afternoon plan plus a few additional and cutting it close, I rolled into the finish at 3:49.  I had blown off several large supermarkets due to the Saturday am congestion therein so I wasted a fruitless 20 minutes going into smaller stores that sell food looking for a jar of Whole Nutmeg in a spice aisle; 50 points that went uncollected.  It grabbed it early last year, before stores got too busy.  In the end I had 4 mistakes; Mark Twain House has 6 chimneys (got it right last year) but only 9 lost points, nbd; in 2 spots I copied incorrect info from a sign; final mistake was given half point since others had same info thus it wasn’t a real clear description in the rally book.

It was a well-spent Saturday riding through parts of the area I’ve never seen and playing a game so I didn’t mind my result as I went over to collect my burger and hot dog.